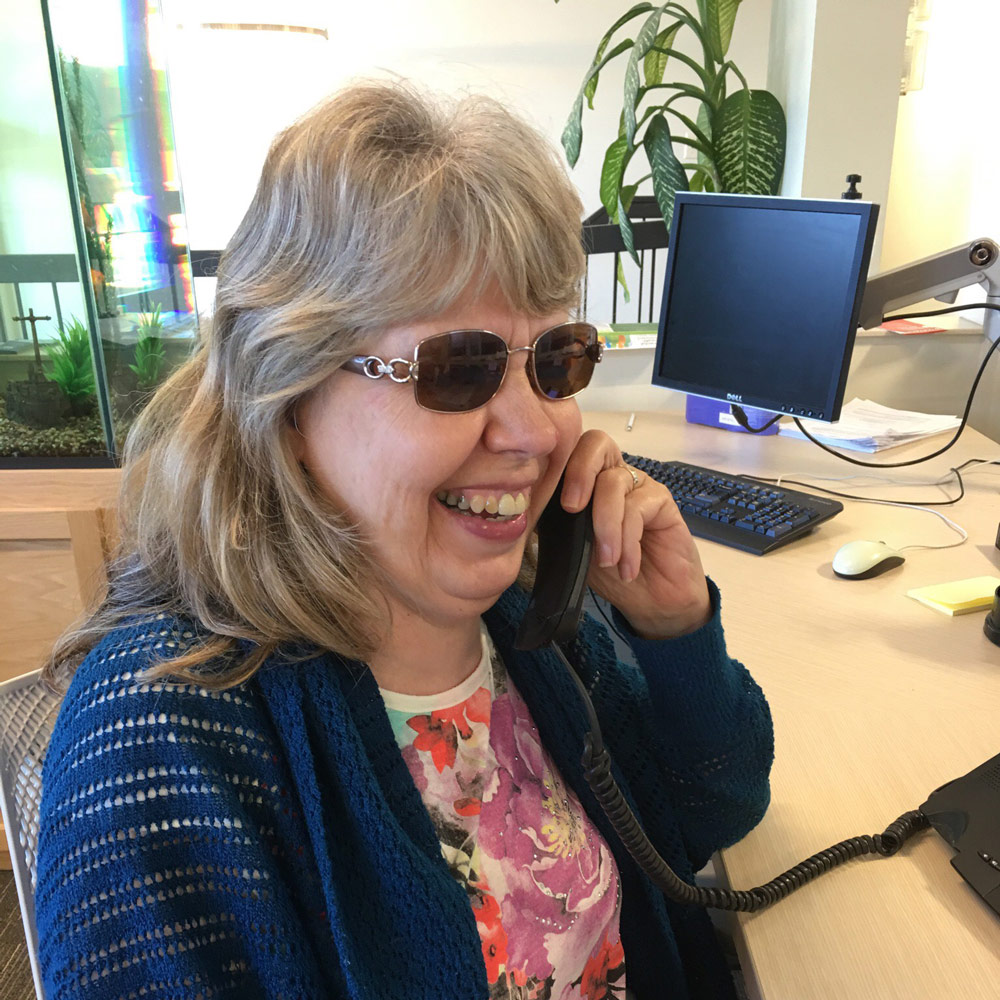 Posted at 00:41h in News, Spotlight by planetclaire
0 Likes

Calynn Hendrickson first heard about Vail Place after moving to Hopkins in 2010. With an educational background in psychology, counseling and wellness, Calynn was looking for a place to volunteer her services, in the hopes of facilitating a wellness group. After years of being told that her abilities were limited due to her lack of sight, Vail Place was eye-opening experience. “I was warmly welcomed and accepted by all, and encouraged to participate in the work-ordered day right away,” Calynn says. “I found a place to go and spend the day, socializing with other people, making friends and feeling useful. It felt like I was going to work, just like anybody else.”

After losing her sight at age 16, Calynn encountered a significant amount of bias regarding her abilities, particularly as she pursued her education. “I was constantly being told I couldn’t do things as a blind person,  whether as an intern or a volunteer,” Calynn says. “In fact, the constant doors shutting in my face affected me, was a major cause of my mental illness.”

This all changed when Calynn found Vail Place. During her first meeting, a Vail Place staff member told her she could do anything she wanted. It was her first experience hearing the words “yes you can” and for Calynn, that was empowering. She soon realized she could become a member as well as a volunteer, and quickly got down to work.

Like many other Vail Place members, Calynn began working in the kitchen, helping prep food and even sweeping floors. Eventually, she found her current position where she works full-time as a receptionist for the Hopkins Clubhouse, fielding calls and greeting people. She has also met her goal of helping run a group, and for the past three years has been co-facilitating a peer-run support group on Thursday evenings. In addition, Calynn has found a sense of purpose in helping others understand more about the lives of blind people.

“People at the Clubhouse have learned about blind people by being around me. It’s easy to hide a mental illness, but you can’t hide the fact you’re blind. Here at Vail Place, people are willing to let me in and I don’t feel ashamed. Everybody knows and accepts me. It’s been an amazing thing for my mental wellness.” Calynn  describes Vail Place as a welcoming, supportive environment where people can learn new skills, build confidence and develop friendships. She calls it a “happy place with a lot of laughter.”

On top of her time at Vail Place, Calynn describes herself as a very creative person, whose hobbies including playing the flute and singing. She also likes to write, dance, swim and do yoga. Calynn loves science fiction and everything Star Trek, and considers herself a major Trekkie!

As a blind person, Calynn has also worked alongside guide dogs for many years. She has had eight guide dogs since losing her sight and sadly, lost her last dog Herman this past January. Although she initially felt that Herman would be her final guide dog, she has since reconsidered and is applying for another dog.

Our thanks to Calynn for everything she does at Vail Place, and for being an ambassador for adults with mental illness and those with visual impairments. Hopefully we will see Calynn and her new canine companion in 2017!