Many Paths, One Story 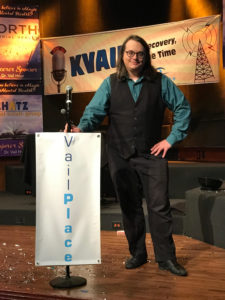 In both his professional and personal life, HR Coordinator John Fournelle has a fondness for stories. As he prepares to celebrate his two-year work anniversary at Vail Place in November, John said one of his favorite parts of the job is the opportunity he has to interact with Clubhouse members and learn their stories. “It’s not an ‘Upstairs, Downstairs’ kind of environment here at all,” said John. “We are all part of Vail Place and I value the fact that I get to know so many people here.”

In his role as HR coordinator, John has “16 mega areas” for which he’s responsible including payroll, benefits, training, onboarding and more. Across the agency, John said Vail Place is on target to have 70 employees by year’s end, so managing data is a major task. John has also been instrumental in new initiatives at Vail Place, like the current Tobacco Free program and the organization’s Diversity Council.

John spends most of his time at Vail Place’s administrative offices in Hopkins, as well as at the Hopkins Clubhouse, but he also frequently travels to the Uptown Clubhouse and Vail House in Dinkytown, a 23-bed residential group housing facility formerly known as Cabrini Transitional Housing. “It’s really important for me as HR Coordinator to not only meet with managers onsite regularly but for the people there to know who I am and how they can work with me as needed,” he said.

“We were involved in a mental health initiative and invited a Vail Place member (who was also a board member) to participate in an event. I was very impressed with everything I heard,” said John. “Learning that Vail Place members were so active within the organization, including being board members,  was very impressive to me. It impacted my decision to apply to Vail. When an opportunity came up at Vail Place, I already knew it was an amazing organization and I thought it would be a cool path for career growth.”

Speaking of paths, John’s original one had a different beginning, but he is grateful for where it has led him. “I had a master’s degree in theology, and I had planned to get my doctorate,” he said. “But before I started the program, I decided to explore some other options, which brought me to PPL. I’m also a writer, so I thought I would have time to do that as well before going back to school.” Along the way, John discovered mission-driven organizations, like PPL and now, Vail Place, really spoke to him and that he had landed on the work he loved. “I feel like I’ve found a niche and there’s so much to build on,” he said.

Telling His Own Stories

Writing remains a very important part of John’s life. “I write both fiction and non-fiction; I have a collection of essays that I hope to publish one day.” In his writing life, John focuses on a queer perspective of philosophy and politics. He’s also working on a short story in the queer fiction realm which he would love to see turned into a play for the Minnesota Fringe Festival someday. John’s personal story is one of someone who, as he says, “has multiple vocations in life,” and is happy to see what happens next. “I love working in HR at Vail Place, I love writing and I love my friends and family,” he said.